Anyone Who Had a Heart by Malcolm Henshall


I attend a creative writing class in Leeds and am writing a novel. It is based on the life of a family who have a child with profound and multiple learning difficulties. Much of the content will be humorous, the following not so much so. It may or may not form part of the book...


I’d noticed her in Home Bargains a few minutes earlier. She had that tough look about her - a great big tattoo across her neck. She reminded me of the girl with the dragon tattoo but without the good looks. I can’t begin to tell you how many piercings she had in unsuitable locations. She had a surly ‘don’t you cross me’ air surrounding her. All the shoppers were giving her a wide berth. I wouldn’t swear to it in court but I’m pretty sure I saw her putting an extra large bag of Haribos inside her coat.

Avoiding the Sky man, the Help for Heroes collecting tin and averting my eyes from the strange phenomenon of ‘threading’, I pushed Ruby down to the cheap bookshop. It’s useful having Ruby with you sometimes. Whether it’s embarrassment or pity, those charming, full-of-life, cheerful, out-of-work postgraduate ‘chuggers’ never stop me when I’m with Ruby, even when they’re collecting for Mencap.

As soon as we reached the bookshop I realised I couldn’t get the chair in there. Ruby didn’t mind, she just wanted the cafe.

“We’ll go to the Costa up the other end of the centre,” I told her. Ruby stared blankly into the distance. As we were passing Home Bargains again, a woman rushed out slap bang into the side of Ruby’s chair.

“Fucking Norah,” she said. “I almost went arse over tit old man. Mind where you’re going.” I looked to see who was shouting at me. It was that woman.

“It’s you who should be minding,” I said quietly, bending to check Ruby was OK. The blank stare remained unaltered.

“Who d’you think you’re talking to, you old git?”

I knew it wasn’t a good idea getting into an argument but I couldn’t stop myself.  “I was just stating the bleedin’ obvious,” I said as I straightened up.

“Shouldn’t be allowed,” she said. I wasn't sure whether I was meant to hear that.

“What shouldn’t be allowed?”

“What about the people in them?” I said.

“Them too, shouldn’t be allowed.” As she said this she grinned. I should have gone at that point but was feeling angry, protective and hurt.

“She’s worth ten of you,” I said. At that moment I meant it.

“Dream on old man,” she said as she continued on her way. Ruby lifted her head and I swear she smiled. I shouted after the woman.

“Go on, get on with your sad, miserable, lonely life.” She looked round and her face told me I was right. I felt ashamed. She turned into the British Heart Foundation shop.

I pass them daily,
two old maids in a field
named Magic and Paris.

Can it be my moods and their bearing
are synchronised
with each season?

In autumn, the mournful season,
they loom vastly from the fog
like lorries on the M62.

Huddled in winter,
the beasts of the field close ranks,
rugged-up, muttering and stamping.

But in spring, bright spring,
reminded of girlish madness,
they burst wildly through hawthorn hedges. 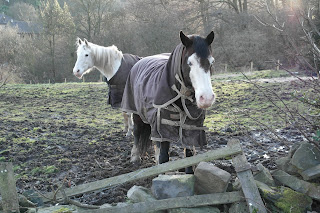 Reaching Down by Suzanne Hudson

Ruined buildings excite me.
I can feel the presence
of those who have gone before.
I touch the stone
and I feel an energy that
logic alone couldn't begin
to explain.

I peer through
a narrow arched window
and wonder who else has
seen that view.
I climb crumbling stairs that
lead to nowhere,
adding my footsteps
to the thousands of others
who have worn smooth hollows
into the stone.

I touch a pillar and feel
like my hand is reaching
down through the
centuries, connecting with
those who were once here.
I talk to them, like a madwoman,
saying 'I know you're there' and
I believe they can hear me.

It's time to go.
I have to tear myself away.
I feel that if I could stay
a little longer, they would
talk to me and tell me
all their secrets.

I'm stirred up for days afterwards,
like I've been a vessel
through which they've
tried to communicate.
Will I ever be brave enough
to trust my instinct
and tell their stories?


It’s October already, and we are well into the new school term. At just nine and seven, the boys are already bringing home their fair share of homework, and like all children, there is always something they would rather be doing. It’s my job, then, to inspire them to do it. Not an easy task.

This week, William brought home a poem with some questions to complete. The poem was a good one, (“Old Flyer” by Nick Toczek– look it up), but William was not enthused. Something about the arrangement of the words on the page, the stanzas, the rhyming, seemed to intimidate him, which manifested itself in sullen uncooperativeness and mutterings about it being a “stupid poem”.

To coax him along I suggested he look at one of the easier questions, about identifying similes.  This prompted an argument about whether a simile can include “than,” as well as “like” and “as”. Here, my English Literature Masters Degree cut no ice with William, and he was only persuaded when we consulted the highest authority known to a nine-year-old - Google.

Having completed this question we had gained some momentum, so we had a more enthusiastic discussion about the poet’s comparison of the dragon with a snake and what that suggested. Question three – done.

The question which had him stumped was about how the poet felt about the dragon.  I tried to persuade William to read the poem out loud, but he wasn’t keen. I should stress here that I am not a natural performer, (I haven’t been near a stage since the Nativity when I was 7), but desperate times call for desperate measures. I climbed onto the kitchen stool and roared out the poem, waving my arms around like the dragon’s wings as it soared through the sky, hissing like the steam from its nostrils, bowing before “His Dragonness”.

The boys laughed at me, of course, but between snorts William shouted “he thinks the dragon’s cool!” Eureka!

Without the pressure of being asked questions, we have discovered that the boys quite like poems. I have a favourite anthology called I Like This Poem, which was originally compiled to celebrate the International Year of the Child in 1979. My original copy is so decrepit it has to be kept in an envelope, but the boys have their own, new edition.

I left the book on the kitchen table, and Oliver climbed up while I’m cooking tea to read to me. At first, he was intimidated.

“Find the section for six and seven year olds,” I suggested. The first poem was “The Witches’ Spell” from Macbeth. Oliver has heard of Shakespeare, so he looked worried.

“Try,” I suggested. He did, and he was gripped. His class is reading Roald Dahl’s The Witches so this fits right in, and he was so excited by all the gruesome ingredients dropping into the witches’ cauldron.

“Oh yes,” I said. “That’s the good thing about poems, you can read them over and over again.”

So now, William and Oliver are both flicking through the book, finding poems to try. William enjoys reading “In the Ning Nang Nong”, with all the silly sounds performed with gusto. He also likes “The Marog from Mars” about a boy who is secretly an alien.  I have introduced them to “The Night Mail” and they love the train rhythm (they are both big rail enthusiasts) and “Windy Nights” with its galloping hooves.

They are excited to find “The Centipede’s Song” from James and the Giant Peach, and “Outdoor Song” from Winnie the Pooh, (the one that starts “The more it snows tiddly pom”).

“Are those poems too?” William asks, doubtfully. He’s still not convinced of my literary credentials.

“Well, it’s a book of poems, so they must be!” declares Oliver, and William is satisfied.

Sharing these poems and seeing the boys’ reactions has got me excited about them all over again. As Michael Rosen writes on the cover of my favourite anthology, “I don’t just LIKE these poems – I LOVE them”.