My Name is Holly, and I Have a Secret by Juliet Thomas 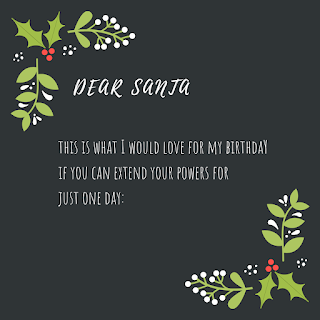 My name is Holly and I have a secret, don’t tell anyone, but I don’t LOVE Christmas.

I realise I am in a very small minority, but it started out with my parents being very inconsiderate, and choosing to have their first child around December. I popped out 12 days late, on Christmas Eve.

And who the hell cares about a birthday on the Eve of the most anticipated day of the year?

I particularly don’t like it this year, my 50th birthday. I know that celebrating my 50th will be at the very end of my family and friend’s Christmas list, if on there at all.

But it’s not just that, it’s the fact that Christmas was getting earlier each year anyway, and then in 2020, whilst looking for any kind of cheer in the middle of a pandemic, many people in their wisdom decided to start decorating trees and homes as soon as possible, like that would make it all better?

This year, Christmas trees have been outside the Co-op for weeks, along with carefully constructed towers of mince pies inside. Huge neon reindeers blink at me already on my drive home, looking as startled as me that it’s that time of year, AGAIN. The kids emailed lists were sent to me in September, with all the links copied ‘helpfully’ and pasted from Amazon or Boohoo.

And then there’s the thrill of now being middle-aged / ancient.

And so, Christmas is just another thing on my long suffering ‘To Do’ list, isn’t it? And I absolutely refuse to sort out my own birthday, again, this year.

Christmas Day itself takes a lot of managing; you cannot let Aunty Betty and Ash’s Dad, Bob sit together for example, or there will be hell to pay.

Sandra, my Mum will fuss to help and get under my feet and Ash will be three sheets to the wind by 11am just to get through it. The last few years I’ve joined him, things seem a little smoother with a protective layer of prosecco taking the edge off.

I can see Olive hitting the wine too, at 17 she’s now into the swing of swigging mine, maybe she can be the entertainment? Then there’s the fun game of who’s got the wrong plate this year? And now that Rowan, his girlfriend and Ash’s mum, Antonia, are vegan, it throws a whole other level of complexity into proceedings. I add a mental note to sit them together to help me remember.

'Worldly wise' Aunty Betty will declare plenty of inappropriate sexual advice to the kids, check that they are not talking with their mouths full and will give a detailed explanation of what ‘Woke’ means whilst they role their eyes.

Bob, who doesn’t do manners, will have picked up his turkey leg, gravy dripping down his chin and chomped through it like a hyena, but with any luck, and half a bottle of whisky down him, will be asleep in the corner chair by the time of the Queen's Speech.

I sigh, today is November 25th, one month to go… I really should get on with ordering some things, but instead I find myself daydreaming, of what the Perfect Christmas Day could be like. I decide to make a list, and doodle holly leaves around it.

I start with Dear Santa; this is what I would love for my birthday if you can extend your powers for just one day:

I write quickly, my thoughts and words streaming across the page, a release from must dos, lists, planning, prepping dinner, life on a timed schedule but then before I know it, the alarm on my phone goes off, telling me I need to pick up Dad for his doctors appointment.

I push aside the list and wearily grab my keys.

Weeks later, on the 23rd of December, my family are acting strangely, Christmas has not been mentioned now for several days, and I worry that my less positive view on the festive season has had an effect. I don’t want to spoil it for everyone else.

At 6pm on the dot, Ash tells me I need to get dressed into something nice, a dress preferably. I look at him quizzically and turn to see the kids standing at the doorway grinning like idiots. In Olive’s hand is a gold frame, and inside is a familiar piece of paper, decorated with a border of Holly leaves.

She hands it to me and gives me a hug, ’50 is special Mum, you deserve everything on this list.’

Rowan steps forward and kisses me on the cheek, ‘Yep this year Dad is looking after your Birthday, and then you’ll come back to a Christmas to remember, cos me and Olive are sorting it!’

I’m speechless, and tears are threatening, ‘I don’t know what to say.’ I turn to Ash, ‘Is this true, is this happening?!’

‘It is! Now go get ready, that list is going to take some getting through!’

I turn and head to the stairs but pause at the glowing Father Christmas in the hallway, smiling, I nod to the jolly decoration, and whisper; ‘Cheers, Santa.'